Somehow, over the course of 2017 I managed to address my WIP (work-in-progress) pile; bravely unravelling a small number of the languishing projects and happily finishing others.

I was surprised by the sense of achievement I felt. Yes, the finished objects were satisfying, but unravelling the ones that weren’t making the grade was equally (and possibly even more) worthwhile. Recognising a lost cause and doing something about it?

In particular, I was smitten with the idea of rescuing some yarn from an unhappy situation and giving it a second chance. There aren’t many times in life where you can simply unravel something and start again 😉

So why stop at unfinished objects? My Ravelry record tells me that I had completed an aran cable jumper back in 2014 … and I know I have never worn it. Too warm, too long, too bulky. I didn’t even like it enough to offer it to friends or family. But it was a finished jumper, so it had never occurred to me to undo it … until now! 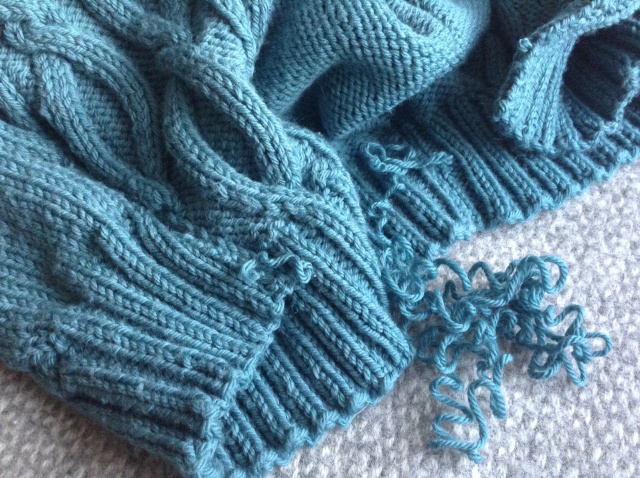 in less than 30 minutes!

The back of the wardrobe is unchartered “frogging” territory for me and I’m disproportionately happy about it! Even finished objects can be reviewed, unravelled and upcycled. I am already excited at the prospect of creating something new with this rescued wool. It feels like a metaphor for the year ahead and one I want to remember.

I’m also a little worried that I might have got a taste for unravelling … so if you have any yarny items you want “frogged”, feel free to pass them in my direction!

Sharing my love of yarny craft and encouraging others to give it a go!
View all posts by yarnsmithery →
This entry was posted in Uncategorized and tagged finished, knitting, Unravel, Upcycle, Wool. Bookmark the permalink.

This site uses Akismet to reduce spam. Learn how your comment data is processed.

Yarn in the City

Empowering women to succeed in business

Inspired by seasons, celebrations and memories.

WoolWork
Crafts from the Cwtch